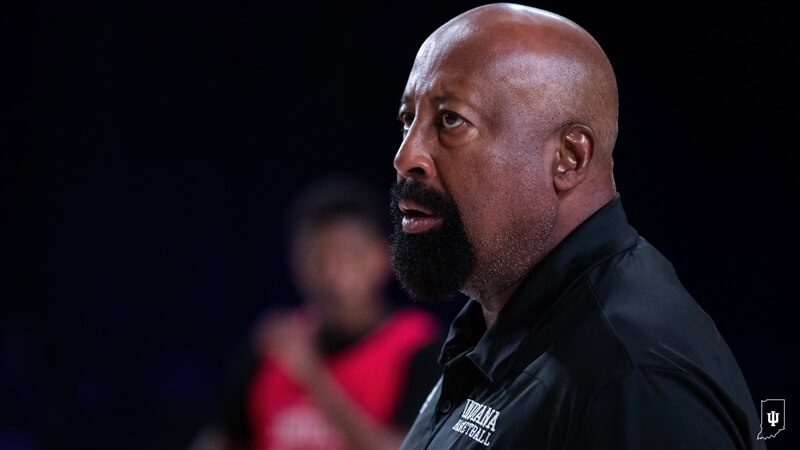 Here is the full transcript from Woodson’s press conference via ASAP Sports:

Kevin Warren: The next coach on the podium is Indiana University head coach Mike Woodson, who is not only an amazing collegiate player and pro player, but he brought a lot of skill to the Big Ten Conference. He does a lot with the Boys and Girls Club through the Charity Golf Championship.

Great leader man and I know he’s excited for the upcoming IU Basketball season. They had a good track last year. Most of his team are back, and some really great players. I am so happy that Mike Woodson is part of the Big Ten family.

Mike Woodson: good morning. First of all, let me say it is an honor to be back this season. I’m thinking of my coaching staff all season calling me a rookie, so I can get that off the plate this season, being my second year (smiles).

Thank you, Commissioner Warren, and your staff for the beautiful work you have done thus far.

With that being said, I’ll open the floor to a few questions.

s. Obviously, it’s a really loaded schedule outside of conventions this season. Is this what the state should expect from Indiana year after year as long as you are at the helm?

Mike Woodson: Again, I think the competition is great, man. I mean, that’s good for your show. I thought last season we made a big step. That was the first time they tested Big Dance, my whole team. I remember back in the day we always used to try out the big dance. So I was very excited about the ball club.

We thought we were coming into this season, and we don’t even know if we’ll bring Trayce back, Race has committed to coming back, we’ve already set our schedule with North Carolina, Kansas and Arizona. Which I think is good. It gives us the chance to play some of the best teams in the country, just look at where you are as a football club.

Q: What is the position of Jalen Hood-Schifino in your lineup, and the other freshmen, what impact do you expect them to make?

Mike Woodson: It was very competitive. All the freshmen who attended this season, I love them because they are so competitive. Galen sits at the top. I included him in the starting lineup, and he was in the second team. I’m just trying to look at the groups just to see who’s going to start, and who’s going to get the minutes.

But he was a great addition to the ball club because he does a little bit of everything for our team, which is kind of nice.

s. How is your team dealing with so much pre-season hype and hype about their prospects?

Mike Woodson: Well, that is what it is. It’s part of the game. When I was in school as a player, I never bought into the world rankings, what the media would say about our football club. You still have to go out and play the game.

Hell, in my final year, we ranked first and didn’t make it. So at the end of the day I think it’s a nice thing for our players who haven’t experienced that.

Q: I wanted to ask you about the return of Trace. He obviously wants to have a great season with you guys, but how can he make it work for him individually and his future missions as well as become a more dynamic player for you guys?

Mike WoodsonHe was the missing piece, the main piece of the ball club. I’ve been riding along this summer trying to figure out if I’m going to get Trayce or I’ll have to go out to the gate and find another big one.

But he made it easy for me when he decided to make the decision to come back. It just puts us in a better place. I mean, it was a great season last season. I just managed to take it to the next level, so much so that if we approach our business in terms of winning, I think everything else will take care of itself.

He put in a lot of work this summer, shooting in the midrange, three-point range. I was never the one who told him not to shoot her. I think in the game he just has to know when to take the shot.

He was the backbone for us last season. He does a lot of things for our team. He blocks shots, bounces, pushes the ball into the break. It’s a great pass from the double team.

I just think the sky’s the limit for him this season. I’ll try to push him in the right direction and hope he takes care of everything himself.

You’ve talked about the past in the past that you used to use every year to reach the heights you’re now aiming for this season. What is the thrill factor for you? When you wake up in the morning, you’re training this group, and now all the things you’ve been striving to do in your playing days are on the table for this group.

Mike Woodson: Well, once again, my crew and I, we have a big mission ahead of us. That’s what I signed up for, and that’s okay. I feel good about what I do as a coach.

But at the end of the day, we got 17 players playing at a high level in order to win the Big Ten or the national title. The Big Ten is good, man. You have a lot of great coaches, a lot of great teams.

Then our early schedule is very competitive. We have a lot of work to do this season, man. But you can’t run away from it or be afraid of competition. That’s what college basketball is all about.

I came here, and I signed up for this, so I’m looking forward to pushing these guys to the limit and seeing what happens.

Q: The Big Ten has always been known for its positions on the court. How important is a dominant big man in the Big Ten and how have you seen the league move more towards centerless basketball?

Mike Woodson: Again, I think college basketball has always been built around having someone, big attendance, low. When you roll around in the college game, not only in the Big Ten, there are a lot of nice dominant players playing in the low position. We happen to have one.

It’s nice for us in terms of when I’m getting ready and trying to put a game plan together, I know I’ve got an ace in the hole that can do a lot of things around the bucket.

It will take more than just Trayce. If you go deep 9, 10, 11 these guys should be ready to play and compete around it to help us win at a high level. Oh man, she’s a lot of talent in college basketball. You cannot fake it. You have to go out and compete every night for 40 minutes to see what happens.